Was Venus Once Habitable? 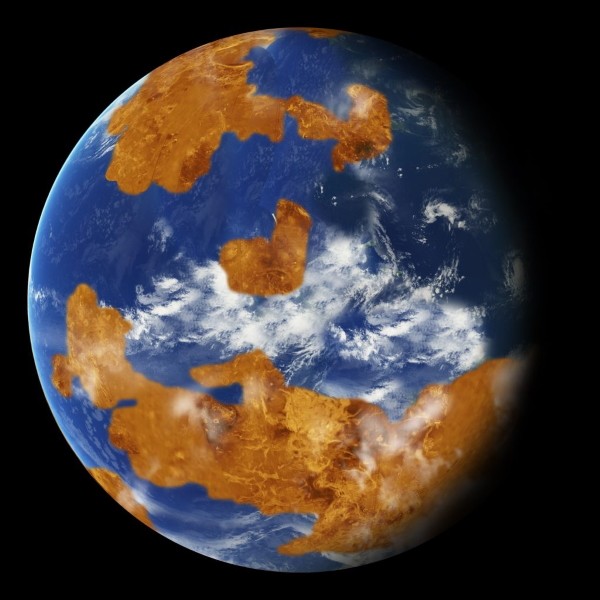 An artist’s impression of Venus with water and an Earth-like atmosphere. Venus may have had a stable climate for billions of years. Now, a new study is uncovering the possibility that a global resurfacing event, probably linked to volcanic activity, may have transformed the planet from an Earth-like climate to the 462 degree hot-house that we see today. Earth and Venus seem completely different. Earth is a lush, clement world teeming with life, while Venus is hellish, with its surface roasting at temperatures higher than those of a kitchen oven. But underneath it all the two planets share a number of striking similarities. They are nearly identical in size. The basic composition of Venus and Earth is very similar. One difference stands out, however -- Venus has very little water. Were the contents of Earth's oceans to be spread evenly across our world, they would create a layer 3 km deep. If you were to condense the water vapor in Venus' atmosphere onto its surface, it would create a global puddle just 3 cm deep. Something catastrophic happened on Venus and what caused this is still a mystery. (Content Credit: The Europlanet Society) (Image Credit: NASA)

Was Venus Once Habitable?

Venus may have been a temperate planet hosting liquid water for two to three billion years, until a dramatic transformation starting over 700 million years ago resurfaced around 80% of the planet according to a study prepared by a team at NASA's Goddard Institute for Space Science. This gives a new view of a possible climatic history of Venus that may have implications for the habitability of exo-planets in similar orbits.

Forty years ago, NASA’s Pioneer Venus mission found tantalizing hints that Earth’s “twisted sister” planet may once have had a shallow ocean’s worth of water. To see if Venus might ever have had a stable climate capable of supporting liquid water, Dr. Michael Way of NASA's Goddard Institute for Space Science and his colleague, Anthony Del Genio, created a series of five simulations assuming different levels of water coverage.

In all five scenarios, they found that Venus was able to maintain stable temperatures between a maximum of about 50 degrees Celsius and a minimum of about 20 degrees Celsius for around three billion years. A temperate climate might even have been maintained on Venus today had there not been a series of events that caused a release, or outgassing, of carbon dioxide stored in the rocks of the planet approximately 700 to 750 million years ago.

“Our hypothesis is that Venus may have had a stable climate for billions of years. It is possible that the near-global resurfacing event is responsible for its transformation from an Earth-like climate to the hellish hot-house we see today,” said Way.

Three of the five scenarios studied by Way and Del Genio assumed the topography of Venus as we see it today and considered a deep ocean averaging 310 meters, a shallow layer of water averaging 10 meters and a small amount of water locked in the soil. For comparison, they also included a scenario with Earth’s topography and a 310 meter ocean and, finally, a world completely covered by an ocean of 158 meters in depth.

To simulate the environmental conditions of 4.2 billion years ago, 715 million years ago, and today, the researchers adapted a 3D general circulation model to account for the increase in Solar radiation as our Sun has warmed up over its lifetime, as well as for changing atmospheric compositions.

Although many researchers believe that Venus is beyond the inner boundary of our Solar System’s habitable zone and is too close to the Sun to support liquid water, the new study suggests that this might not be the case.

“Venus currently has almost twice the solar radiation that we have at Earth. However, in all the scenarios we have modeled, we have found that Venus could still support surface temperatures amenable for liquid water,” said Way.

The cause of the outgassing that led to the dramatic transformation of Venus is a mystery, although probably linked to the planet’s volcanic activity. One possibility is that large amounts of magma bubbled up, releasing carbon dioxide from molten rocks into the atmosphere. The magma solidified before reaching the surface and this created a barrier that meant that the gas could not be reabsorbed. The presence of large amounts of carbon dioxide triggered a runaway greenhouse effect, which resulted in the scorching 462 degree average temperatures found on Venus today.

“Something happened on Venus where a huge amount of gas was released into the atmosphere and couldn’t be re-absorbed by the rocks. On Earth we have some examples of large-scale outgassing, for instance the creation of the Siberian Traps 500 million years ago which is linked to a mass extinction, but nothing on this scale. It completely transformed Venus,” said Way.

There are still two major unknowns that need to be addressed before the question of whether Venus might have been habitable can be fully answered. The first relates to how quickly Venus cooled initially and whether it was able to condense liquid water on its surface in the first place. The second unknown is whether the global resurfacing event was a single event or simply the latest in a series of events going back billions of years in Venus’s history.

“We need more missions to study Venus and get a more detailed understanding of its history and evolution,” said Way. “However, our models show that there is a real possibility that Venus could have been habitable and radically different from the Venus we see today. This opens up all kinds of implications for exoplanets found in what is called the “Venus Zone,” which may in fact host liquid water and temperate climates.”

In 2010, the European Space Agency’s Venus Express helped planetary scientists investigate whether Venus once had oceans. If it did, it may even have begun its existence as a habitable planet similar to Earth.

These days, Earth and Venus seem completely different. Earth is a lush, clement world teeming with life, while Venus is hellish, its surface roasting at temperatures higher than those of a kitchen oven.

But underneath it all the two planets share a number of striking similarities. They are nearly identical in size. And thanks to ESA's Venus Express orbiter, planetary scientists are now revealing other similarities too.

One difference stands out, however -- Venus has very little water. Were the contents of Earth's oceans to be spread evenly across our world, they would create a layer 3 km deep. If you were to condense the amount of water vapor in Venus' atmosphere onto its surface, it would create a global puddle just 3 cm deep.


Yet there is another similarity here. Billions of years ago, Venus probably had much more water. Venus Express certainly confirmed that the planet has lost a large quantity of water into space.

It happens because ultraviolet radiation from the Sun streams into Venus' atmosphere and breaks up the water molecules into atoms -- two hydrogens and one oxygen. These then escape into space.

Venus Express has measured the rate of this escape and confirmed that roughly twice as much hydrogen is escaping as oxygen. It is believed that water is the source of these escaping ions. It has also shown that a heavy form of hydrogen, called deuterium, is progressively enriched in the upper echelons of Venus' atmosphere, because the heavier hydrogen will find it less easy to escape the planet's grip.

"Everything points to there being large amounts of water on Venus in the past," said Colin Wilson, Oxford University, UK. But that does not necessarily mean there were oceans on the planet's surface.

Eric Chassefiere, Universite Paris-Sud, France, developed an alternative computer model in 2010 that suggested the water was largely atmospheric and existed only during the very earliest times, when the surface of the planet was completely molten. As the water molecules were broken into atoms by sunlight and escaped into space, the subsequent drop in temperature probably triggered the solidification of the surface. In other words -- No oceans.

Although it is difficult to test this hypothesis it is a key question. If Venus ever did possess surface water, the planet may possibly have had an early habitable phase.

Even if true, Chassefiere's model does not preclude the chance that colliding comets brought additional water to Venus after the surface crystallized, and these created bodies of standing water in which life may have been able to form.

There are many open questions and much more extensive modeling of the magma ocean–atmosphere system is required to better understand the evolution of the planet.

The Europlanet Society, launched in September 2018, is an organization for individual and corporate members to promote the advancement of planetary science and related fields in Europe. The Society provides Europe’s planetary science community with a platform to exchange ideas and personnel, share research tools, data and facilities, define key science goals for the future, and engage stakeholders, policy makers and European citizens with planetary science. The Europlanet Society is the parent organization of the European Planetary Science Congress (EPSC).