Will Future Telescopes Be Able To See Alien City Lights? 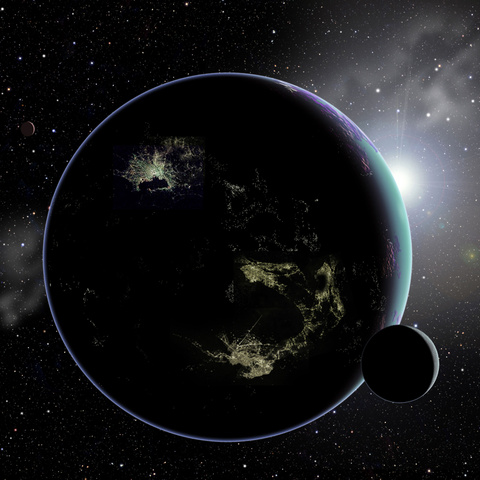 In the search for extraterrestrial intelligence, astronomers have hunted for radio signals and ultra-short laser pulses. Avi Loeb (Harvard-Smithsonian Center for Astrophysics) and Edwin Turner (Princeton University) suggest a new technique for finding aliens: look for their city lights.

"Looking for alien cities would be a long shot, but wouldn't require extra resources. And if we succeed, it would change our perception of our place in the universe," said Loeb.

As with other SETI methods, they rely on the assumption that aliens would use Earth-like technologies. This is reasonable because any intelligent life that evolved in the light from its nearest star is likely to have artificial illumination that switches on during the hours of darkness.

How easy would it be to spot a city on a distant planet? Clearly, this light will have to be distinguished from the glare from the parent star. Loeb and Turner suggest looking at the change in light from an exoplanet as it moves around its star.

Spotting this tiny signal would require future generations of telescopes. However, the technique could be tested closer to home, using objects at the edge of our solar system.

Loeb and Turner calculate that today's best telescopes ought to be able to see the light generated by a Tokyo-sized metropolis at the distance of the Kuiper Belt - the region occupied by Pluto, Eris, and thousands of smaller icy bodies. So if there are any cities out there, we ought to be able to see them now. By looking, astronomers can hone the technique and be ready to apply it when the first Earth-sized worlds are found around distant stars in our galaxy.

"It's very unlikely that there are alien cities on the edge of our solar system, but the principle of science is to find a method to check," Turner said. "Before Galileo, it was conventional wisdom that heavier objects fall faster than light objects, but he tested the belief and found they actually fall at the same rate."

As our technology has moved from radio and TV broadcasts to cable and fiber optics, we have become less detectable to aliens. If the same is true of extraterrestrial civilizations, then artificial lights might be the best way to spot them from afar.

Headquartered in Cambridge, Mass., the Harvard-Smithsonian Center for Astrophysics (CfA) is a joint collaboration between the Smithsonian Astrophysical Observatory and the Harvard College Observatory. CfA scientists, organized into six research divisions, study the origin, evolution and ultimate fate of the universe.