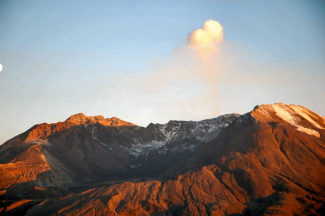 Last night I had an appointment with one of my co-workers to take her and her family down to Mt. Saint. Helens to both do some binocular observing around the mountain and then to "Fly her to the Moon" once it got dark. She had won the trip at a fund raising auction (to raise money for community groups) at work. Every year they do them and I usually offer either something like this or to view the Milky Way from Mt. Rainier. Quite a few people bid on these auctions and they raise a lot of money.

Anyway, we got to the mountain around 7pm I just setup the binoculars and left the telescope in the car. From the observing point we were at we could see about 50 elk grazing on the plains between us and the crater. The dome inside the crater was steaming in several places and overall, it was at least twice as large as it was the last time that I was this close to it which was 10 months ago. In other words, there has been more dome building growth going on there over the 10 months than has taken place over the previous 24 years (and that was also quite a lot).

Just before the sun set down and shortly afterward many of the clouds that were in the sky turned various shades of color with a bright reddish/orange being the most prominent.
Being able to zoom in on the clouds with the 22x60s made for some very nice observing fields.

Many of the planes that fly up from California to Seattle pass by Mt. St. Helens and we discovered that if you watch those planes flying high overhead with the binoculars that the jet engine exhaust streams that they leave behind look a lot choppier that they do when you view them naked eye from ground. And fortunately for us, we were viewing them around sunset time so those jet streams also assumed a reddish/orange color. It may sound like a mundane activity to watch those, but at 22x with through a pair of high quality binoculars and with the color being a reddish/orange rather than white, we were all fascinated by it.

I wanted their moon experience to be special so I waited until it got dark for that. First, we viewed it through a pair of 10x70 binoculars and since they were mounted, you could see a number of craters view was pretty nice. Next, I switched to the Taks and at 22x you could you could very clearly see all the major features on the moon. My co-worker – Barb and her children were very impressed but so was I. The view of the moon through the Taks was more like what I've experienced before with a telescope rather than binoculars. And even any false color on the edge of the moon was barely detectable.

Nevertheless, the Taks were just the appetizer; the main course was still to come. So next I setup my NP-127 with binoviewer and put a pair of 24mm Panoptics in it. The resulting view of the moon (at 55x) through is somewhat three dimension and stunning. I've seen it at least a 100 times and it still impresses me. Barb and her kids were blown away. One of the things about that view that make it very impressive is that the field is still large enough that your can see the full moon (although, it was only a half moon last night) but the sky background is ink black and the moon is tack sharp and there is a wealth of detail that is visible on it. The view is literally like being in a spaceship and looking out the front window at the moon as you are approaching it.

Next, I switched to a pair of a pair of high power eyepieces to ramp the power up nearly to 200x. At that power the true field shrinks dramatically and the view is like what you would get if you were 120 miles above the surface on the moon. The view is also so clear, sharp and three dimensional that Barb said she felt like she could just reach out and touch it.

After finishing up with the moon I showed them a few double-stars and deep sky objects. To me those views looked almost lousy because of the light from the moon was washing out much of the contrast that is so necessary for deep sky observing. However, to Barb and her children that small amount of deep sky stargazing and earlier moon viewing was one of the most impressive visual sites they’ve ever seen.

At around 11:30pm (and still before the moon had fully set) they decided to call it a night because they had a long drive back home. I decided to stay longer because for an astronomer, the real night begins after the moon sets. As the moon was getting quite low in the Western sky it was acquiring a deeper yellowish/light orange color. Since I knew that it would be setting shortly I decided to watch it with my new pair of 22x60s.

The moon was low enough in the sky that if I turned my head away from it for a minute or so and then when I looked towards it I could see that it had moved a little lower in the sky. But the descent was not rapid enough that I could actually see the moon moving. That was true regardless of whether I was viewing it naked eye or with the binoculars.

However, once it got low enough some fir trees on a ridge several miles away were becoming visible and their shapes were illuminated/silhouetted in front of the setting moon and then I could see the movement because the trees remained stationary relative to where I was but the moon was going down behind them. About every two seconds or so I could see it drop a little lower in relation to the trees and the horizon. But it wasn’t a smooth movement, but rather like drop-a-little, then pause for about two seconds and then repeat the cycle. However, the regularity of it was like watching the second hand as it moves on a watch.

Of course, it wasn't the moon that was moving but rather the earth that was rotating and that was what made the whole view so compelling. Where else on the surface of this planet can you actually see this movement? And by that time the orange color was more intense and the sight was aesthetically beautiful well as of scientifically interesting.

But wait, there's more. After most of the moon had dropped down below the horizon and only about 15% of it (near the top) was still visible, the scene changed. Because it was a half moon rather than a full one that was setting, it wasn’t like I wasn’t watching at circular object slowly disappear (e.g., similar to watching an eclipse). Rather, the top portion of the moon was at an angle and its overall shape assumed the appearance of a large mountain. And, since most of the orange part had already gone beneath the horizon, the color turned more whitish but there were still some orange colored highlights that were visible. In the Northwest part of the country where I live we have many huge 10,000 foot plus snow/ice covered volcanoes so I've seen scenes similar to this many time before. There is even a name for it for when peaks acquire those orange glowing color and it’s called alpenglow. It occurs right after the sun sets (at the lower elevations), but while the sun is still able to cast a small amount of reddish/orange light on the tops of mountains because they’re many thousands of feet higher than the observer who is viewing them from below. This phenomenon usually lasts around 2 minutes and then fades away.

Anyway, while the moon was setting I was just enthralled with the view and not trying to analyze what I was seeing. Rather, the idea that the scene resembled a Cascade volcano just suddenly came out of the right side of my brain. All of a sudden it was like wow that looks like Mt. Baker. Unfortunately, the whole experience didn't last more than about 25 seconds.

Key to having this experience was the use of a good pair of binocular in general and the 22x60 Taks in particular. If I were watching this naked eye all that I would have seen was a small/featureless whitish/orange thing slowly drop beneath the horizon. However, with binoculars it was an entirely different experience. Between their very high 22x power and their to-die-for contrast the vicinity of the horizon where the moon was setting appeared much darker through the Taks than it would to the naked eye. And at 22x the moon was enlarged enough that I could see lots of detail that would either be invisible to the naked eye or not well shown in a lower power pair of binoculars. And of course the view through the Taks was so clear it was like I wasn’t even using binoculars.

Finally, there was another aspect to this scene that contributed to making it so memorable. The Taks made all the field surrounding the setting moon so dark (and yet still clear) that when the moon had changed color back to mostly white and what was left of it assumed the shape of an ice covered Cascade volcano, the entire scene took on the appearance of some mysterious mountain far off (but not too far off) in a magical land. From where I was the night sky appeared to be very dark and yet far off in the distance was this beautiful/majestic snow and ice covered mountain that could somehow radiate its own beautiful light. And, since it was appearing right on the horizon and the some fir trees were still visible in the field, it wasn't like there was some mysterious white thing descending against a pitch-black background. No, I could clearly see that “the mountain” was on Terre firma and that it looked to be about 50 to 60 miles away.

All-in-all quite an illusion and quite a sight. One of the things I love about binoculars is that they work like cookie-cutters and allow you to zero in/cut out your own visual fields. That is, they not only give you more detailed views of the targets that you are aiming at, but they also can exclude (by varying the magnification and corresponding field size) everything else from the field that doesn’t enhance it. Your eyes are then immersed in a field of your own creation and your senses react to what the see as if it were both real and to scale. With good optics and an arresting target sometimes the views you can get are spectacular and would be impossible to duplicate with the unaided eye no matter how close you could get to an object.