Mt. Saint Helens through a Binoviewer 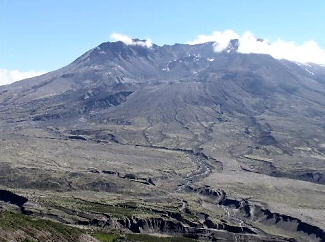 [ARTICLEIMGR="2"]I live about 90 miles from the Mt. Saint Helens volcano in Washington State and have visited it many times before during both the day and at night to do stargazing down there. With the recent upsurge of activity and some unusually nice weather we've been having these last few days I decided to go down there yesterday (i.e., Saturday, October 2nd) to see if anything would happen.

Usually, when I go terrestrial observing I either bring along a pair of hand hold-able binoculars (i.e., 8.5 x 42s or 12 x 50s) or I bring my 15 x 60s which I mount on a small Bogen tripod. However, I recently acquired a new 2.00-inch Zero Magnification OCA from Harry Seibert that enables me to use my Tele Vue binoviewer with my Tele Vue NP-127 telescope without incurring the penalty of increased magnification. With this setup I’m now able to binoview with a 5-inch rich-field apo at only 26x with a pair of 24mm Panoptics and at 38x with a pair of 16mm T5 Naglers.

Given the potential of such a system I started thinking about opportunities for using the scope more terrestrially. Mount Saint Helens is one site that I would have wanted to eventually take it to, but with the recent upsurge of activity there it created a rare opportunity that I couldn’t pass up.

The news stories on Friday (the day of the first small ash eruption)
said that there were many people down there and they predicted that many thousands more come down over the weekend. From some past observing trips I’ve done there I knew a perfect spot to go to but I also knew that it would fill up quickly unless I got there very early. I’m not a morning person and it was hard to get up at 4:00am but I did and managed to make it down to site I wanted to setup at by sunrise. To my surprise and shock I found the area entirely filled up, cordoned off and reserved for the media.

I then drove further up the road a ways to the Johnson Ridge observatory area. Unfortunately, at that site you can’t see the mountain from it very large parking lot. That requires about a quarter mile hike up a hill via a switchback trial. I can and have carried my 15 x 60s and Bogen tripod up there before, but for a lot of reasons I wasn't going to try to do that with the telescope. So that meant I had to find another site that would have a decent view and where I could set up my scope next to my car. I then remembered a site that I had stargazed several years ago that was about 6 miles further to the west.

When I got to that site there was only one car there and I was able to secure a perfect spot off in a far corner of the parking lot where I could setup my scope and have my food, cloths and gear nearby. All morning long a steady stream of cars drove by and most of them went up to the Johnson Ridge observatory area. During much of the morning I was
facing the sun and there was a lot of glare and the viewing
conditions were far from ideal. The mountain itself also seemed to
be quite and there was a large cloud that hovered over the crater and would not blow away. I used much of that time checking out the other terrain around Mt. Saint Helens and looking at Mt. Adams (a 12,300 foot snow covered giant volcano that is much bigger than Mt. Saint Helens) about 35 miles to the east.

Around noon things started to improve. That morning cloud had
finally blown away and the sun was now overhead rather than in front
of me so I was able to get better views into the crater. However, I was so far to the west that I could only see part of the dome that is inside of it. However, I could see the inside of the eastside crater walls. All morning long there were hundreds of small earthquakes but none that were strong enough for me to feel them. However, they were strong enough to keep rattling the crater walls and shaking rocks and volcanic ash down off of them. Several times while looking into the crater I could see those rock sides.

Shortly before 1:00pm the day's largest steam cloud shot up out of
the dome and drifted up and out of the crater. From where I was I
could only see it as it emerged from the top of the crater and it did
not look nearly impressive to me as it must have to those who were still at Johnson Ridge and who had unobstructed views of it.

I then started to notice a little puffs of what looked like white
smoke on the outside of the crater. When I turned the telescope to them I could see that they were small white steam clouds that were billowing out of the side of the mountain. These were not gentle clouds drifting towards the sky. They emerged quickly and with an intensity that looked like they were being forcefully expelled by pressure. The
typical one might last anywhere from 30 seconds to a minute and over
the course of the next hour or so I saw at least a half dozen of them.

By this time other people had come into the area where I was and came
over hoping to be invited to have a look through the telescope. One
couple who lived about 30 west of the mountain (and who lived here
during the large eruption back in 1980) were enthralled and somewhat
nervous to see the small steam clouds shooting out of the outside face of the volcano. Neither they nor I had ever heard of that happening at before at Mt. Saint Helens. Usually, all the visible action seems to take place inside the crater. Anyway, at that point I was having second thoughts about staying there.

Around the same time the USGS scientists were picking up more
indications of magma movement beneath the volcano and concluded that
something bigger might be happening than they originally expected.
They passed that on to the Park Service who then began an evacuation
of Johnson Ridge. From where I was many miles away I could see
(through the telescope) that people were leaving Johnson Ridge and
heading back down to their cars in the parking lot. It didn't take
very long for there to be a long stream of cars that stretched 5
miles from Johnson Ridge to the Coldwater Visitor Center.

It was also kind of eerie to watch them all heading out of the Johnson Ridge area because I didn't know yet how serious the situation was and I was also watching those steam clouds rising from the southwest face of the mountain. On the one hand I was developing an ominous feeling about what might be happening but on the other I now had the best seat in the house and was reluctant to give it up. When I turned my scope over towards the Coldwater Visitor Center I was very relieved to see that there were no signs of an evacuation from there so that probably meant it only affected the Johnson Ridge and Loowit Viewpoint areas. Later, after talking to some reporters I found out that that was the case.

Once the evacuating cars got past Coldwater Ridge (the Park Service wouldn’t let them in there because it was already full) many of them started pulling over of the side of the road and people just got out and observed from there. Some cars came down to where I was and were starting to fill up the parking lot. A Park Ranger pulled up in front of the entrance and refused to let anymore in. Shortly after that the media trucks arrived and the ranger let them in. Soon I was surrounded on all sides by media vehicles and lots of people.

Just about the time the media arrived (around 2:00pm) things quieted down on the mountain. I could still see some steam bursts on the inside crater walls plus some more rock slides. Even though the crater was 8.5 miles away the views were very clear and spectacular to watch through a telescope equipped with a binoviewer and ultra-wide/sharp Tele Vue Panoptic and Nagler eyepieces. For a while I also watched a helicopter flying around just above and outside of the crater and then it headed down into it. It's blue and white color contrasted nicely against the crater walls and it was easy to see/follow it as it flew around inside the crater. One thing that really impressed me was how small it looked flying around in there. From my view of it through the eyepiece it seemed like I was also in there watching it from the other side of the crater.

Seeing my scope, a few media people from Canada and Oregon came over
to interview me and get looks through the telescope. One guy I
talked with for a while told me that they thought they saw steam
coming out of the outside of the volcano where they were up at Loowit
Viewpoint area but didn't have time to focus on that area because the
orders to evacuate came around the same time. Anyway, he was very
interested to hear that I had seen and must have told others because
five or six times later that afternoon different media people came
over to ask me about the steam vents. Several also asked to have a look through the telescope and all were very impressed with the views.

Finally, just after sunset I packed up and drove home. It was a
long/hot day in the sun and I was tired enough to sleep until 11:30
the next morning. I later read an article on the web about Friday's small ash eruption and learned that it had occurred in the southwest corner side of the crater. So obviously there is something going on underneath that section of the volcano and that's probably why I was seeing those steam vents popping out on the outside southwest face of the volcano on Saturday.

It would have been nice to have been there when there was a bigger
eruption and be able to watch the billowing ash/mushroom clouds rise
up with my telescope, but I'm still satisfied to have seen as much as
I did. I was also very pleased with how well the NP-127/Bino Vue
combo performed together and I will be on the lookout for more opportunities in the future to use them again together terrestrially.