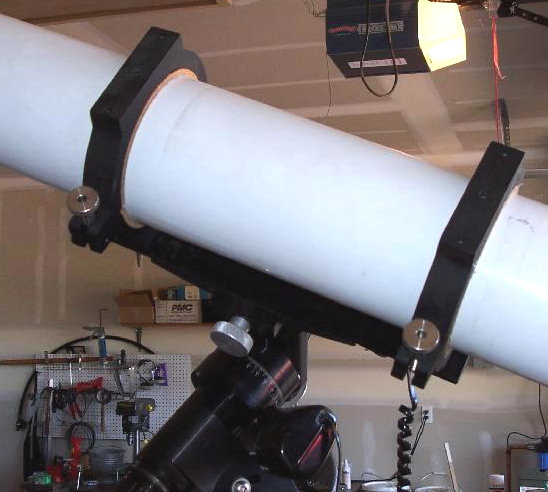 My Photon Instruments 5" f/9 refractor has been the subject of several previous reviews here. I've mentioned that the mechanical aspects of the telescope were definitely below the optics. One of the symptoms of that is the rings that came with the OTA. After about a year of use, the thumb screw that holds one of the hinged rings in place became increasingly loose. The thumb screw threads were apparently much harder than the metal into which they turned.

What made this especially frustrating is that after having installed the rings on a Losmandy dovetail plate, I had opened the rings up perhaps a dozen times. An unsurprising side effect was that when aiming at objects near the zenith, the one ring that was still tight did not exert enough friction on the smooth metal tube to keep it in place--leading to some quite startling (although not destructive) OTA motion at star parties.

So what to buy? My experiences with Ken Dauzat's rings for my 8" reflector had been very positive, and all things being equal, I would have gone back to him for a set for the refractor. But I had a substantial credit with Anacortes Telescope to use, and so I started looking at what they had available.

Parallax makes a variety of rings, and while the rotating ring sets were mildly attractive, I concluded that the 5.5" standard ring set (then priced at $160) made the most sense.

I measured the diameter of my tube by putting a long piece of paper around the circumference, then marking where the paper reached all the way around. You can then measure the diameter of the tube by measuring the length from one end of the paper to the mark, and dividing by pi. This turned out to be 130mm.

It turned out that my tube diameter was not exactly the same as the sizes that Parallax was making, so they asked if I would prefer a liner to fill the space, or to spend a bit more money to have a smaller diameter bored out to 130mm. I decided to save some money and use the liner approach. My reasoning was not only would this be less expensive, but if my tube was a little larger than 130mm, I could cut or sand the liner to a slightly larger size--something that would be impractical for me to do with metal.

It took about three weeks, but the Parallax rings arrived. They are quite solid--in fact, I would say that they are probably heavier than they need to be for my application. 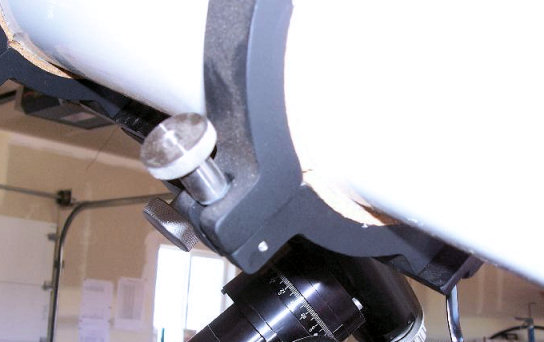 The thumb screws that hold the rings together are very solid , beautiful pieces of work--much nicer than what came with the refractor's original rings.

The liner is cork--a good choice, because it won't damage the finish on an OTA. Within reasonable limits, the cork will compress, reducing pressure on the tube.

I must confess that I was a little put off by the finish. It is a black, crinkle finish. There's nothing wrong with it--but I was expecting a glossy finish like the rings I had bought from Ken Dauzat. They aren't unattractive, and in the dark, you won't be able to see the difference.


They attached easily to the Losmandy dovetail plate, and in almost a year of use, they have given me absolutely no concern about their durability or mechanical quality.

One nice and unexpected feature: the tops of the rings have threaded holes as well, making it easy to attach more hardware (such as camera mounts, guide scopes, and your one megawatt laser for clearing out clouds) on top.