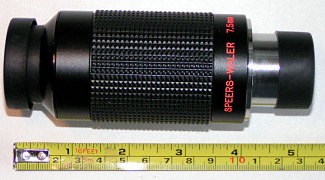 About me – a boy and his toys

My interest in space and astronomy goes back as far as I can remember, but it wasn’t until recent years that I really became active in astronomy. My first scope was one of the dreaded department store telescopes. By some miracle, this one was actually halfway decent – it showed me the craters on the moon and the rings of Saturn. From that moment on, escape was impossible. I had a brief encounter with a Synta 120mm achromatic refractor, which after only two weeks was replaced by an Intes-Micro Maksutov-Cassegrain. This scope stayed with me for about two years until aperture fever made me buy a 10” Dobson made by Teeters Telescopes. I recently picked up a used Vixen 102mm fluorite apo refractor for those quick peeks between the clouds.

I’m located in the Netherlands where light pollution is a serious issue. If you look at a nighttime satellite image of Europe, find the brightest spot by the North Sea and that’s where I am. Low altitude, heavy industry and proximity to the sea don’t help either, there usually is a brown haze blurring out most deepsky objects. As a result I’m mostly a planetary observer. Someday I hope to move to a place with better skies, but that time hasn’t arrived yet.

With Mars getting ever higher in the sky and getting closer to opposition, I decided I wanted a bit more magnification. My shortest focal length eyepiece was a Pentax XL 10.5mm, occasionally boosted with a Celestron Ultima 2x Barlow. This new eyepiece would have to be something around 7mm or 8mm. At those focal lengths I would get a comfortable 200-230X magnification in my 10 f/6.3 dob, and 225-260X in my 4” f/9 refractor when using the barlow. There were two other demands it would have to meet. I don’t like eyepieces with a small field of view, they give me the feeling that I’m looking at a picture through a tiny tube. I found that my personal preference was at least 50 degrees, since that puts the edge of the field just far enough out that I have to look around to really see it. I would also need this eyepiece to be affordable, at the moment I cannot afford eyepieces like another Pentax or a Televue.

When I received the eyepiece, the first thing I noticed was that it was lighter than I expected. As you can see in the pic, at 12.5cm/5in this is not a small eyepiece yet it only weighs 300grams / 10.6 ounces.

The middle section of the eyepiece is ridged and rubberized, making it very easy to hold and it doesn’t feel cold to the touch. During several freezing winter nights I’ve learned to appreciate little touches like that! Another thing that’s immediately noticeable is the large eye lens with a dark green coating. It’s 25 mm/1 inch in diameter, a lot larger than other eyepieces of this focal length. There’s a small rubber eyecup too, which is soft enough to simply push down if you’re wearing glasses but it can also be folded down completely.

On the day the SW7 arrived a small miracle occurred: the skies were clear! The first target for the SW7 was a building about a mile away. I used the refractor for this since the dob cannot go down that far. The view was a little bit on the dim side, but that’s hardly surprising when you’re pushing a 4” scope to 128X while standing in bright sunlight. Turbulence made it impossible to say anything more conclusive about optical quality, but at least there were no obvious faults.

When it was finally dark I began by pointing my Vixen Fluorite at Altair. My Teeters Telescopes 10” Dobson was still cooling down, so any comparisons would have to wait a bit longer. At first glance the star focused down to a nice pinpoint, but when I moved it towards the edge of the field it became a lot softer. I also noticed that I had to place my eye very close to the lens if I wanted to see the entire field of view. If I pulled back a bit I quickly lost sight of a lot the field, I’m guessing that at a comfortable viewing distance I had about 65 degrees left. When I did that it also became hard to hold my eye in the correct position, the view would black out quite easily. There also appeared to be a bit of false color when stars weren’t exactly in the middle of the FOV.

By the time Mars was high enough to clear those pesky trees that are always getting in the way, the dob had cooled down enough to join the party. A quick glance at Altair through the dob confirmed that there was indeed false color, and it wasn’t any better or worse than in the fluorite so this is definitely due to the eyepiece. The extra brightness provided by the dob also caused some ghosting. I then switched back to the fluorite and took aim at Mars. The atmosphere was quite steady as I had just seen in the dob, yet the view seemed to be just a bit short of perfectly sharp. For comparison purposes I changed to the 10.5mm Pentax and the Barlow, and the view definitely improved. Back to the Speers-Waler and there’s that slight blurriness again, along with a slight red edge on one side of the planet and a blue one at the other. There was also a soft glow around the planet that wasn’t there in the Pentax. The effects were subtle but it was enough to make hard to see details disappear. Trying both eyepieces in the Dobson gave the same results.

To rule out the possibility that it was the atmosphere that was causing these problems, I decided to try on a few more nights. The weather gods must have smiled upon me, because the three following nights were all clear. The results didn’t change though, the barlowed Pentax outperformed the Speers-Waler in sharpness, contrast and comfort. By that time I had already made up my mind: the Speers-Waler wasn’t the right eyepiece for me. I intended this to be my high-power planetary eyepiece but it failed to pull out those small details that I was hoping to see.

My city skies don’t allow me much in the way of deep sky observing (limiting magnitude is frequently worse than 4) but I imagine that the SW7 would be a good eyepiece for deep sky objects that need a lot of magnification. Yes, I know I don’t sound too enthusiastic so far but bear in mind that I’m comparing the SW7 to one of the best eyepieces on the market. The SW7 is not a bad eyepiece by most standards, I’m just a very demanding observer. To give at least some impression of how well the SW7 would do, I’ve done some further testing.

I started with checking for distortion by looking at a building again. Now that I was looking for it, there was obvious pincushion distortion in the Speers-Waler. The Pentax XL had some too, but it was hardly visible. Using Photoshop I made a drawing comparing the amount of distortion I saw with both eyepieces when using my Vixen FL102.


I also did a comparison of the coatings by shining a bright light on the eye lens. As you can see the reflections in the Speers-Waler are a bit brighter than in the Pentax, and they tend towards blue-green while the Pentax is more purple. This wasn’t much of a surprise, since Pentax Super Multi-Coatings (SMC) are just about the standard that other coatings are compared to.

Next I wanted to compare the transmission characteristics of both eyepieces. To do this I placed both eyepieces against a white, brightly lit background. I then put my camera on manual so that there would be no differences caused by camera settings. 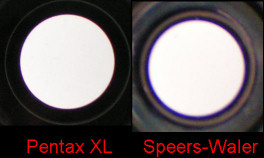 Several things are visible in this shot. First, the inside of the Pentax is much darker than the Speers-Waler. Second, the reflections in the Speers-Waler are by far the brightest. Note also how large the eye lens is, even when compared with the Pentax. Third, it may be hard to see on a computer screen but the background is a bit brighter in the SW7 – not an easy feat as the Pentax eyepieces are already very good in this aspect. A closer look reveals additional information.

In the Pentax there is a small blue seam on the left, in the Speers-Waler it’s far more obvious. The view through the SW7 seems a bit softer too, but to be honest it could well be that it’s soft in the Pentax too but that it’s just too dark to notice.

While the Speers-Waler 7.5mm certainly isn’t a bad eyepiece, in my opinion it falls a bit short for very high magnification planetary work. Having said that, it’s still a good eyepiece at an attractive price. In fact, it won’t be easy to find an eyepiece that offers such a large FOV and excellent transmission at this price level. But, since it didn’t meet my specifications for a high-power planetary eyepiece, I returned it.