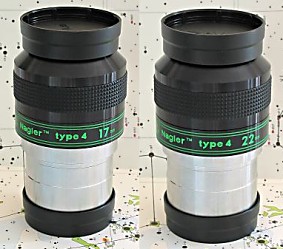 [ARTICLEIMGR="1"]After using my NS11 for awhile I began lusting after premium, large apparent field of view 2" eyepieces, especially after looking through some. I read reviews and newsgroup posts about the various types available and settled on TeleVue Panoptics, with the 22mm & 27mm Panoptics covering the medium-low & medium power range. These delivered 127x & 104x respectively, with .53° & .65° true fields of view, along with excellent contrast and sharpness. Their only negative feature is the "pincushion" effect, most noticeable when you slew across a star field. It's not noticeable when the field is motionless. Only a crazy person would feel the need for something "better". So, I adjusted the straps of my straightjacket and continued to happily observe the night sky...

I was reading the Talking Telescopes group on Yahoo! one fine day and read a post about the Nagler 22mm T4 extolling its virtues. The one that caught my eye was that it had the same true field of view as the 27mm Pan with the magnification of the 22mm Pan, resulting in a darker sky background. This, combined with claims of legendary Nagler sharpness across the whole field inflamed my desire to possess this wondrous eyepiece. So, of course I bought one....

After using this eyepiece for about a year I've concluded that I made a wise decision. In my NS11 it perfectly frames the showpiece objects of Sagittarius such as the Swan, Lagoon & Eagle Nebulae, as well as small to medium sized open clusters. Other objects that look great in the 22mm T4 are the Crescent & Dumbell Nebulae, as well as larger globular clusters like M13 & M4. Its high contrast views reveal wispy details and faint stars in these objects. Unlike some 82° apparent field of view Naglers, the whole field is easily seen without cramming your eye into the top of the eyepiece. It's very comfortable to use, with the caveat that proper eye placement is important to avoid blackouts. This is, however, easy to achieve with the Radian-style adjustable eyecup position.

Since the 22mm T4 replaced both the 22mm & 27mm Panoptics, with unqualified success, I wondered if the 17mm T4 could bring similar benefits to my observing experiences. The numbers showed that it would give me a bit more magnification than my 18mm Radian (165x vs. 156x), with an even wider true field of view (.50° vs. .39°) along with the wider apparent field of view inherent in the Nagler design. The only way to know for sure was look through one so...I bought it.

The performance of the 17mm T4 is very similar to the 22mm T4, and with its higher magnification it seems to excel on most globular clusters and medium-sized galaxies. The magnification is high enough to start to show some details in small objects, such as some planetary nebulae and even planets. When the "seeing" wouldn't support higher magnifications I used it on Mars and was rewarded with sharp, high contrast, ghost-free images.

Like the 22mm T4, the whole 82° apparent field of view is easily seen, although eye placement is a bit more critical with this one than with the 22 T4. Again, the Radian-style adjustable eyecup makes it easy. The only negative characteristics of these two fine oculars are their prices ($460.00 & $385.00) and their weights. They are heavy, weighing in at 1.5lbs. & 1.6lbs. respectively.