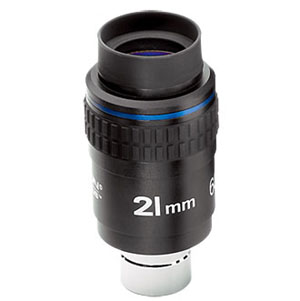 I recently purchased a trio of Orion Stratus 2"/1.25" Hybrid eyepieces from the Orion Telescopes retail store located in Cupertino, CA, each priced at $119. These eyepieces were labeled as fully-multicoated, which I verified by looking at as many reflections of white light as I could on both the top and bottom sides of each eyepiece - all surface reflections looked violet, reddish or bluish in color. I chose focal lengths that would work with my two(2) dobsonian scopes outfitted with 1.25" format focusers, which meant the Stratus that had the longest focal length that could fit into my 8 inch, f/6, and 13.1 inch, f/4.5, Dobsonian scopes would be 21mm in focal length. I also choose the 13mm Stratus for medium powers and the 8mm Stratus for higher powers.

I would like to make it clear that I have not benefited in any monetary way from Orion Telescopes.

I field tested the Orion Stratus 21mm, 13mm and 8mm eyepieces with my 13.1 inch, f/4.5, Red Tube Coulter Odyssey Dobsonian I scope, which yielded respectively, magnications of 71X, 115X and 187X. I also compared the performance of the 8mm Orion Stratus to the 7mm Televue Nagler Type 6 eyepiece. The 7mm Nagler yielded 214X, which meant it produced an image that was about 14% larger than the same image using the 8mm Stratus.

Here are my observations using the Orion Stratus eyepieces in the 13.1 inch Odyssey I Dobsonian scope on a couple of famous objects: Jupiter and the Great Globular Cluster in Hercules:

Stratus 21mm Eyepiece (71X): Jupiter was nicely framed in the center of the field of view with two(2) equatorial belts showing themselves off. As I moved the scope to enable Jupiter to be viewed quite close to the field edge of the Stratus 21mm eyepiece, I could see some amount of distortion of the image of the Jovian giant; this near-field edge distortion was similar to how my scope performed using some of my 1.25" four element plossl eyepieces. The Great Globular Cluster in Hercules was easily seen with a few stars being resolved near the periphery of the cluster when using the 21 mm Stratus eyepiece.

Stratus 13mm Eyepiece (115X): Jupiter began to show off its less prominent belts in addition to its highly visible equatorial belts. The amount of distortion of Jupiter near the field edge of the Stratus 13mm eyepiece was less than that seen using the Stratus 21mm eyepiece, but still visible to my eye. The Great Globular Cluster in Hercules was very easily seen with more stars being resolved nesr the periphery of the cluster when using the 13mm Stratus eyepiece in comparison to the amount of stellar resolution seen through the 21mm Stratus eyepiece.

Stratus 8mm Eyepiece (187X) Compared to Nagler 7mm Eyepiece (214X): Using the Stratus 8mm eyepiece, Jupiter easily displayed several of its secondary belts in addition to its central, equatorial, belts. The Nagler 7mm eyepiece also performed quite similarly as the Stratus 8mm eyepiece on Jupiter. NOTE: The main difference I noticed dealt with the way Jupiter looked at or near the field edge of each eyepiece. For instance, Jupiter displayed a bit of "violet" color on its limb when using the Stratus 8mm eyepiece, but kept its roundish shape and visibility of most of its belts. When using the Nagler 7mm Type 6 eyepiece, Jupiter did not display any appreciable "violet" color on its limb, but did display some amount of further flattening or oblateness of its shape as compared to being observed at or near the center of the field of view, although I could still view most of its belts. The Great Globular in Hercules looked equally exquisite in both eyepieces as there were many stars resolved in both its periphery and towards its central core. Also both eyepieces displayed the faintest stars in this famous cluster equally well.

Recommendations: If you don't wish to spend the money for a Televue Nagler, you might want to consider purchasing an Orion Stratus eyepiece of equal or near-equal focal length. The main drawback, that I can see, is that the Stratus eyepieces are rather heavy when compared to the Nagler eyepieces; close to one(1)pound, as far as I can tell.