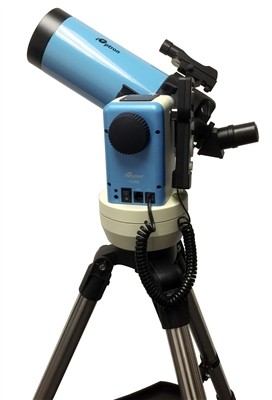 I've owned a telescope of one sort or another nearly all of my double-digit Life. That comes out to about 45 years now. This is my first catadioptric scope and it's one of the Schmidt-Cassegrain type designs. As far as aperture is concerned, it's a step down from my current stargazer, A Soviet-Era Tal Optics TAL-2, a 6" Newtonian reflector. It's quite a beast, a true Russian bear actually. Not a single piece of plastic on the thing and it's mounted on a substantial Tri-Pier. I'll be 60 this Fall and it's beginning to take a toll on my stargazing as the thought of moving the entire contraption outside is becoming more daunting each season.

I really wanted to get iOptrons MAK-150 but that system was over twice the price of this setup so the pocketbook won that argument. I need to gather as much light as I can as I live in heavily light polluted New Orleans, just off off of the French Quarter which is additionally lit 24/7/365 over and above the background City's already glowing dome. Not a major issue as my area of study and decades of observation is our mysterious Moon as well as all of our companions here in the Solar System, including the Sun.

OK, so I've had the MC90 almost a week now and have been fortunate enough to use it nearly every day and every night. The optics are truly remarkable, tack sharp and nearly 3-D. The included 1 1/2" steel tripod is better than I had anticipated and, with the addition of a set of vibration suppression pads, is virtually unshakable by local foot traffic, trucks driving by or even the moderate, steady Gulf breezes New Orleans is in the way of most times. Several items caused me concern during the initial unboxing and have proven to be true issues in practical use.

First off, the chintzy finderscope could not be more poorly manufactured, I broke one of the two cheap plastic adjustment screws in unwrapping it. I managed to pull out it's stub and replace it with a real bolt and decided that it was simply a matter of time and use before the other, undamaged one would fall apart (undoubtedly at THE worst moment possible) so I went ahead and modified it too. It also requires two CR2032 3V batteries to operate but only one was included. It took me a while to figure that out as there's absolutely no reference to the finderscope, it's electrical requirements or it's operation anywhere in the included instructional materials. Also, there no cover for the finderscope's battery compartment compartment. The two stacked button-style batteries just hang there by a wafer thin holding contact clip. The bottom one has shot out of it's tenuous position several times while slewing. They're a bitch to locate in the dark, lemme tell you. I'll have to jerry-rig some kind of retention method before my next outing because far too much was expected by the iOptron design team of that wispy clip as it's obviously losing it's feeble strength already. Having said all that about it, it's quite a nimble performer in the field despite it's incredibly anemic construction. The dot glows intensely and has become a great asset as the much vaunted "CUBE-E" mount has yet to figure out exactly where it is despite my absolute best, and repeated, efforts to program it properly. Every time I switch it on it thinks its a Time Machine and that it's March 10th of 2009! I've studied the included scant instructional text over and over again and queued up every single YouTube video and and internet stargazing forum that Google and Bing searches take me to but all to no avail. The only reassuring thing about my queries is that I'm obviously not the only one out there who's experienced this issue with the "CUBE"mounting system.

The many variable speeds are overkill. It's actually become kinda annoying to have to toggle through all of the unnecessary incrementations trying to find Jupiter, which I can easily see with the naked eye, but the "CUBE" says that it won't rise for another 8 hours! They could easily cut 50% of the slewing speeds and still have a highly functional product. It's battery compartment is also poorly engineered and manufactured. The 8 AA battery thin plastic holding cell is obviously going to become an issue with anything but intermittent use. It has a tendency to not fit by a single millimeter or two when it's filled with it's complement of cell's. When it's empty it slips in and out of the compartment unimpeded but once it's swollen with it's required complement of batteries it very difficult to maneuver back into it's housing, making it a challenge to get it's trap door to snap back into a secure position. It's already popped off twice while slewing in the field and the holding contraption dislodged from its breakaway internal connector. Reassembling that nightmare in the dark was a true pain in the buttocks.

Carry a chopstick with you to guide the male plug back into the internal female socket. I can tell this is going to become a major issue eventually, with the very real possibility of no longer being able to use battery power any longer, effective rendering the entire mounting system useless electronically. That's a bummer because this mount IS NOT designed for manual use. It's awkward and very vague when you have to operate it manually. I'm plagued by the thought of having to replace the entire mount for $300 just because of a poorly designed battery compartment. This entire "MC90 URBAN" system cost me just over that, including shipping, as it was on sale. It goes for nearly $600 regularly. That's another thing, btw, iOptron charges shipping on every item, no matter how much you buy from them at once. That can be quite a substantial addition to your purchase price so be sure and use their shipping calculator when assembling your shopping cart. Here's a big money saving tip: Online stores like Adorama, B&H Photo and nearly every other iOptron authorized vendor, charge exactly the same price as iOptron but all of them offer free shipping on everything. This can save you a $100 or more. That buys a pretty nice nebula, light pollution or solar filter!

Meanwhile, I'm going to continue to try and get my much vaunted "CUBE-E" mount to figure out what day and year it is for the rest of the week before I return it to iOptron as possible defective. As I've intimated, I've been at this for nearly half a century so I don't think that I've overlooked much but I'll give the company the benefit of the doubt.

Oh, P.S. the cool included logo'd backpack is so poorly sewn together that one of the shoulder straps torn from it under a full load as I donned it! good thing it's well padded! Wishing you Clear Skies, everyone!