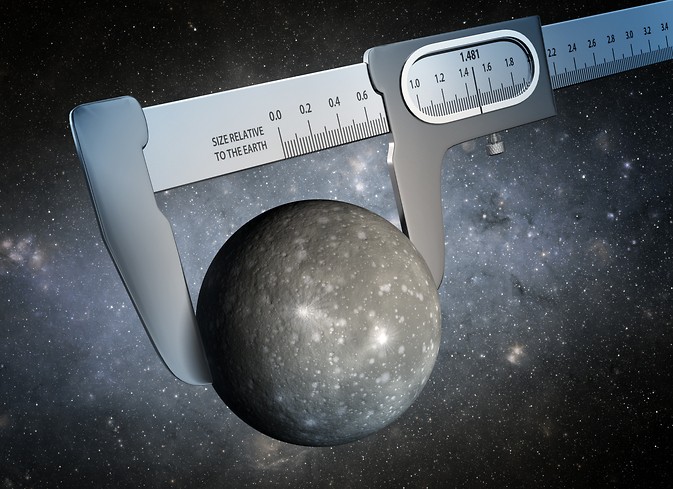 Is Pluto a Planet? In 2006, only 474 members of the International Astronomical Union's 10,000 members (at that time) took part in the vote that stripped Pluto of its status as a planet. In the ensuing years, the other 95% of astronomers have been speaking out and the consensus seems to be that the new definition of a planet is confusing. A number of prominent astronomers have described the decision to strip Pluto of its planetary status as a “muddled” ruling that is unlikely to settle ongoing debates over how to define a planet. Now, a recent study by the University of Central Florida concludes that the reason Pluto lost its status as a planet is not valid and that a proper definition of a planet should be based on its intrinsic properties rather than ones that can change, such as the dynamics of a planet’s orbit -- the rationale that was used by the IAU to strip Pluto of its planetary status. (Content Credit: Robert Wells, University of Central Florida)  (Image Credit: NASA, JPL-Caltech, T. Pyle - IPAC)

A team of top researchers say one thing needs to be cleared up -- “What exactly is a planet?”

In a recent study, the researchers hope to set the record straight with a look at how a planet’s definition has changed since the time of Galileo to the controversial decision the International Astronomical Union (IAU) made in 2006 to create a new definition, one that made Pluto no longer a planet.

The researchers say the IAU’s current definition is rooted in folklore, including astrology, and that the organization should rescind it.

What is a planet? For generations the answer was easy -- A big ball of rock or gas that orbited the Sun. And there were nine of them in our Solar System. But then astronomers started finding more Pluto-sized objects orbiting beyond Neptune. Then they found Jupiter-sized objects circling distant stars -- First by the handful and then by the hundreds. Suddenly the answer wasn't so easy. Were all these newly found things planets?

The International Astronomical Union (IAU), who is in charge of naming newly discovered worlds, tackled the question at their 2006 meeting. They tried to come up with a definition of a planet that everyone could agree on. But the astronomers couldn't agree, so they voted and picked a definition that they thought would work. The results have been mixed. In the end, the IAU did accomplish one thing -- They figured out a way to turn something simple into something complex.

They recommend the requirement that a planet clear its own orbit be removed and that it should focus on one all-important characteristic that gets lost in the current definition -- That a planet is or has been geologically active.

Clearing its own orbit means that a planet is the largest gravitational force in its orbit and doesn’t share or cross its orbit with other bodies in space.

Since Neptune’s gravity influences its neighboring planet Pluto, and Pluto shares its orbit with frozen gases and objects in the Kuiper belt, the IAU’s 2006 requirement meant Pluto was out of planet status.

The issue is growing in importance as new technology, such as the James Webb Space Telescope, comes online and allows for the discovery of even more planets beyond our solar system, says the study’s lead author Philip Metzger, a planetary scientist at the University of Central Florida’s Florida Space Institute.

“There’s an explosion in the number of exoplanets that we’ve discovered over the last 10 years, and that’s only going to increase as we put better telescopes in space,” says Metzger.

“So, we will have more motive to do good taxonomy, and we need to fix this now before we get too far in this revolution with exoplanets” he says. “We want to be doing excellent science because this great influx of data is making it vastly more important to define our new discoveries correctly.”

In a five-year review of the last 400 years of literature on the subject of planets, the researchers found that the geophysical definition of a planet established by Galileo — that a planet is a geologically active body in space — had been eroded.

According to the study, the geophysical definition was used in scientific literature for most of that period, from the time it was proposed by Galileo in the 1600s, based upon his observations of mountains on the moon, until about the early 1900s.

Things started to change when, from about the 1910s until the 1950s, there was pronounced decline in the number of scientific papers written about planetary science, according to the study.

“We’ve shown through bibliometrics that there was a period of neglect when astronomers were not paying as much attention to planets,” Metzger says. “And it was during that period of neglect that the transmission of the pragmatic taxonomy that had come down from Galileo got interrupted.”

Also at play, according to the study, was the effect of another type of publication about planets that had become extremely popular in the preceding two centuries —almanacs.

These annual books often contain information such as weather predictions that rely on astrological factors, such as planetary position, which requires an orderly, limited number of planets to make predictions.

“We found that there were enough almanacs being sold in England and in the United States that every household could get one copy every year,” Metzger says.

Even though the popularity of almanacs had declined by the time of planetary science neglect, their impact remained.

“This was a key period in history, when the public accepted that the Earth orbits the Sun instead of the other way around, and they combined this great scientific insight with a definition of planets that came from astrology,” Metzger says.

This is when astrological views, like that moons, or satellites, are not planets, crept into scientific literature, Metzger says.

“This might seem like a small change, but it undermined the central idea about planets that had been passed down from Galileo,” Metzger says. “Planets were no longer defined by virtue of being complex, with active geology and the potential for life and civilization. Instead, they were defined by virtue of being simple, following certain idealized paths around the Sun.”

Metzger says this continued until the 1960s when missions into space reignited interest and research into planets and objects in the solar system.

During this period of greater discovery, some scientists began using the geophysical definition proposed by Galileo again in scientific literature, while others dismissed moons and many other planetary objects as being less than planets, thereby holding onto the belief that there are a limited number of planets in the solar system.

It was this latter belief that surfaced when the IAU decided to vote on the definition in 2006, the researcher says.

And to justify that belief, Metzger says that group proposed an additional requirement for a planet — that it must clear its own orbit.

Metzger says the clearing the orbit characteristic is a description of a planet’s current trajectory but does not give any insight into the inherent nature of the object. Research also shows it was never really a criterion scientists have used for classifying planets in the past.

“It’s a current description of the status of things,” Metzger says. “But if, for instance, a star passes by and disrupts our solar system, then planets are not going have their orbits cleared anymore.”

“It’s like defining ‘mammals,’” Metzger says. “They are mammals whether they live on the land or in the sea. It’s not about their location. It’s about the intrinsic characteristics that make them what they are.”

Metzger says he’d like to see the IAU rescind the current definition, as well as scientists to realize they are perfectly correct using the geophysical definition of planets, and that the scientific use of the geophysical-focused definition be reflected in textbooks.

“When Galileo proposed that planets revolve around the Sun, and re-conceptualized Earth as a planet, it got him jailed under house arrest for the rest of his life,” Metzger says. “When scientists adopted his position, he was vindicated, in a sense, let out of jail. But then around the early 1900s, we put him back in jail again when we went with this folk concept of an orderly number of planets. So, in a sense, we re-jailed Galileo. So, what we’re trying to do, in a sense, is get Galileo out of jail again, so that his deep insight will be crystal clear.”

“For the term planet, myself and most planetary scientists consider round icy moons to be planets,” Detelich says. “They all have active geologic processes that are driven by a variety of internal processes, as does any world with enough mass to reach hydrostatic equilibrium. As a geologist, it is immensely more useful to divide planets by their intrinsic characteristics than by their orbital dynamics.”

She says that when the IAU made the decision in 2006, she was a fourth grader learning about planets for the first time.

“I’ve always been bothered by the argument to preserve the eight-planet solar system model for the sake of easy memorization for school children,” she says. “Imagine how much more perspective they’d have if they had a full understanding of the diversity of the universe and our place in it? We are not one of eight planets -- We are one of upwards of 200.”