There’s Something Strange in the Neighborhood 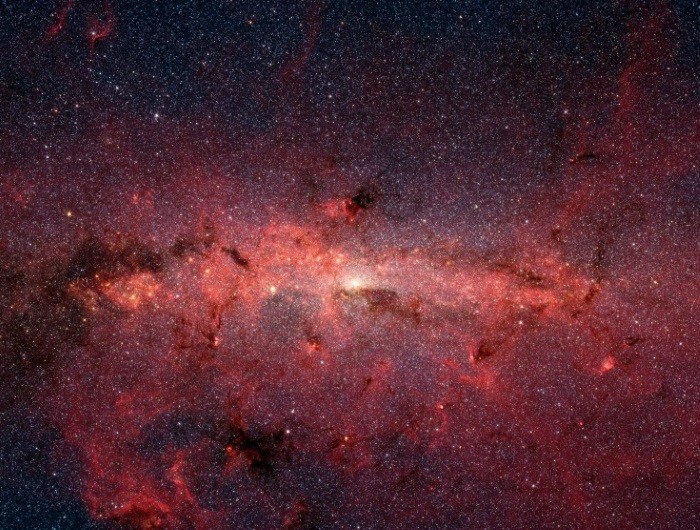 Stars of the Galactic Center -- The center of our Milky Way Galaxy is hidden from the prying eyes of optical telescopes by clouds of obscuring dust and gas. But in this stunning vista, the Spitzer Space Telescope's infrared cameras, penetrate much of the dust revealing the stars of the crowded galactic center region. A mosaic of many smaller snapshots, the detailed, false-color image shows older, cool stars in bluish hues. Reddish glowing dust clouds are associated with young, hot stars in stellar nurseries. The galactic center lies some 26,000 light-years away, toward the constellation Sagittarius. At that distance, this picture spans about 900 light-years. [Image credit: Susan Stolovy (SSC/Caltech) et al., JPL-Caltech, NASA]

More mystery objects have been detected near the Milky Way’s supermassive black hole. Astronomers have discovered several bizarre objects at the Galactic Center that are concealing their true identity behind a smoke screen of dust. They look like gas clouds, but behave like stars.

At the June 6, 2018 American Astronomical Society Meeting in Denver, a team of researchers led by UCLA Postdoctoral Scholar Anna Ciurlo announced their results, which they obtained using 12 years of data taken from W. M. Keck Observatory on Maunakea, Hawaii

“These compact dusty stellar objects move extremely fast and close to our Galaxy’s supermassive black hole. It is fascinating to watch them move from year to year,” said Ciurlo. “How did they get there? And what will they become? They must have an interesting story to tell.”

“We started this project thinking that if we looked carefully at the complicated structure of gas and dust near the supermassive black hole, we might detect some subtle changes to the shape and velocity,” said Randy Campbell, science operations lead at Keck Observatory. “It was quite surprising to detect several objects that have very distinct movement and characteristics that place them in the G-object class, or dusty stellar objects.”

Astronomers first discovered G-objects at the Milky Way’s monster black hole more than a decade ago; G1 was first seen in 2004, and G2 was discovered in 2012. Both were thought to be gas clouds until they made their closest approach to the supermassive black hole. G1 and G2 somehow managed to survive the black hole’s gravitational pull, which can shred gas clouds apart.

“If they were gas clouds, G1 and G2 would not have been able to stay intact,” said UCLA Astronomy Professor Mark Morris, a co-principal investigator and fellow member of UCLA’s Galactic Center Orbits Initiative (GCOI). “Our view of the G-objects is that they are bloated stars – stars that have become so large that the tidal forces exerted by the central black hole can pull matter off of their stellar atmospheres when the stars get close enough, but have a stellar core with enough mass to remain intact. The question is then, why are they so large?”

It appears that a lot of energy was dumped into the G-objects, causing them to swell up and grow larger than typical stars.

GCOI thinks that these G-objects are the result of stellar mergers - where two stars orbiting each other, known as binaries, crash into each other due to the gravitational influence of the giant black hole. Over a long period of time, the black hole’s gravity alters the binary stars’ orbits until the duo collides. The combined object that results from this violent merger could explain where the excess energy came from.

“In the aftermath of such a merger, the resulting single object would be "puffed up”, or distended, for a rather long period of time, perhaps a million years, before it settles down and appears like a normal-sized star,” said Morris.

“This is what I find most exciting,” said Andrea Ghez, founder and director of GCOI. “If these objects are indeed binary star systems that have been driven to merge through their interaction with the central supermassive black hole, this may provide us with insight into a process which may be responsible for the recently discovered stellar mass black hole mergers that have been detected through gravitational waves.”

What makes G-objects unusual is their “puffiness.” It is rare for a star to be cloaked by a layer of dust and gas so thick that astronomers do not see the star directly. They only see the glowing envelope of dust. To see the objects through their hazy environment, Campbell developed a tool called OSIRIS-Volume Display (OsrsVol).

“OsrsVol allowed us to isolate these G-objects from the background emission and analyze the spectral data in three dimensions: two spatial dimensions, and the wavelength dimension that provides velocity information,” said Campbell. “Once we were able to distinguish the objects in a 3-D data cube, we could then track their motion over time relative to the black hole.”

“Keck Observatory has been observing the Galactic Center every year for 20 years with some of the best instruments and technologies,” said Ciurlo. “This alone gives a very high quality and consistent data set, which allowed us to go deep into the analysis of the data.

These newly discovered infrared sources could potentially be G-objects - G3, G4, and G5 – because they share the physical characteristics of G1 and G2.

The team will continue to follow the size and shape of the G-objects’ orbits, which could provide important clues as to how they formed.

The astronomers will especially be paying close attention when these dusty stellar compact objects make their closest approach to the supermassive black hole. This will allow them to further observe their behavior and see whether the objects remain intact just as G1 and G2 did, or become a snack for the supermassive black hole. Only then will they give away their true nature.

“We’ll have to wait a few decades for this to happen; about 20 years for G3, and decades longer for G4 and G5,” said Morris. “In the meantime, we can learn more about these puffballs by following their dynamical evolution using OSIRIS.”

“Understanding G-objects can teach us a lot about the Galactic Center’s fascinating and still mysterious environment. There are so many things going on that every localized process can help explain how this extreme, exotic environment works,” said Ciurlo.

This research is conducted through a collaboration between Randy Campbell at the W.M. Keck Observatory, members of the Galactic Center Group at UCLA (Anna Ciurlo, Mark Morris, and Andrea Ghez) and Rainer Schoedel of the Instituto de Astrofisica de Andalucia (CSIC) in Granada, Spain.

The OH-Suppressing Infrared Imaging Spectrograph (OSIRIS) is one of W. M. Keck Observatory’s "integral field spectrographs." The instrument works behind the adaptive optics system, and uses an array of lenslets to sample a small rectangular patch of the sky at resolutions approaching the diffraction limit of the 10-meter Keck Telescope. OSIRIS records an infrared spectrum at each point within the patch in a single exposure, greatly enhancing its efficiency and precision when observing small objects such as distant galaxies. It is used to characterize the dynamics and composition of early stages of galaxy formation. Support for this technology was generously provided by the Heising-Simons Foundation and the National Science Foundation.

The Galactic Center Orbits Initiative (GCOI), founded and directed by Andrea Ghez in 1994, is dedicated to studying the innermost regions of the Milky Way at the highest angular resolution possible in order to understand the formation and evolution of galaxies and their central supermassive black holes through the measurement of orbital motion. At the heart of GCOI today is a data set that has been collected over 23 years at the W. M. Keck Observatory. This data set led to the discovery of the supermassive black hole at the center of our Galaxy as well as an unexpected nearby stellar population; it holds the promise of testing Einstein’s General Theory of Relativity near a supermassive hole, a new and unexplored regime for this fundamental force of nature. This rich data set has enabled studies of a host of other topics including black hole accretion, extreme star formation, and nuclear star cluster evolution. GCOI’s core collaboration includes over 30 people from UCLA, UCB, Caltech, Keck Observatory, and IAA-CSIC, with funding provided by the National Science Foundation, the W. M. Keck Foundation, the Heising-Simons Foundation, and the Gordon & Betty Moore Foundation. For more information, visit www.galacticcenter.astro.ucla.edu.

The W. M. Keck Observatory telescopes are among the most scientifically productive on Earth. The two, 10-meter optical/infrared telescopes on the summit of Maunakea on the Island of Hawaii feature a suite of advanced instruments including imagers, multi-object spectrographs, high-resolution spectrographs, integral-field spectrometers, and world-leading laser guide star adaptive optics systems. The data presented herein were obtained at Keck Observatory, which is a non-profit organization operated as a scientific partnership among the California Institute of Technology, the University of California, and the National Aeronautics and Space Administration. The Observatory was made possible by the generous financial support of the W. M. Keck Foundation. The authors recognize and acknowledge the very significant cultural role and reverence that the summit of Maunakea has always had within the Native Hawaiian community, and are most fortunate to have the opportunity to conduct observations from this mountain.