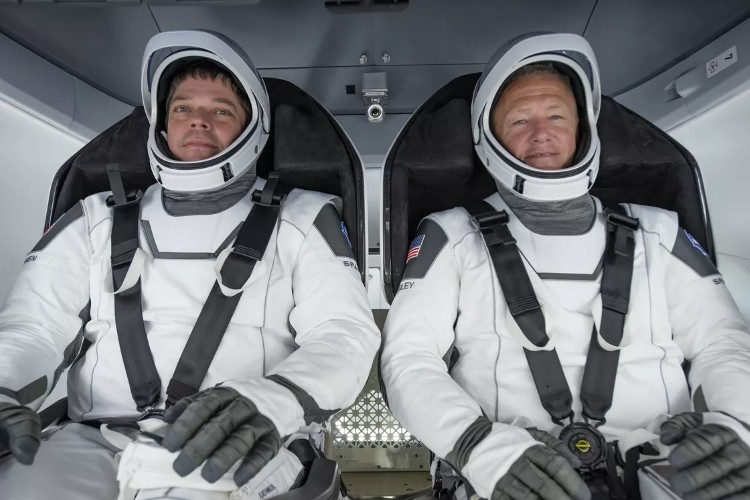 NASA astronauts Bob Behnken (left) and Doug Hurley (right) will be the first two NASA astronauts to fly aboard the SpaceX Crew Dragon spacecraft atop the SpaceX Falcon 9 launch vehicle. NASA’s SpaceX Demo-2 mission is the first launch with astronauts of the SpaceX Crew Dragon spacecraft and Falcon 9 rocket to the International Space Station as part of the agency’s Commercial Crew Program. The flight test will serve as an end-to-end demonstration of SpaceX’s crew transportation system. Behnken and Hurley are scheduled to launch at 4:33 p.m. EDT on Wednesday, May 27, 2020 from Launch Complex 39A at the Kennedy Space Center. (Image Credit: SpaceX, NASA)

A new era of human spaceflight is set to begin as American astronauts once again launch on an American rocket from American soil to low-Earth orbit for the first time since the conclusion of the Space Shuttle Program in 2011. SpaceX and NASA are targeting May 27, 2020 for Falcon 9’s launch of Crew Dragon’s second demonstration mission (Demo-2) from historic Launch Complex 39A at NASA’s Kennedy Space Center in Florida as part of NASA’s Commercial Crew Program. NASA astronauts Bob Behnken and Doug Hurley will be the first two NASA astronauts to fly aboard the Dragon spacecraft to and from the International Space Station (ISS).

As the final flight test for SpaceX, this mission will validate the company’s crew transportation system, including the launch pad, rocket, spacecraft, and operational capabilities. This also will be the first time NASA astronauts will test the spacecraft systems in orbit.

Behnken and Hurley were among the first astronauts to begin working and training on SpaceX’s next-generation human space vehicle and were selected for their extensive test pilot and flight experience, including several missions on the space shuttle.

Behnken will be the joint operations commander for the mission, responsible for activities such as rendezvous, docking and undocking, as well as Demo-2 activities while the spacecraft is docked to the space station. He was selected as a NASA astronaut in 2000 and has completed two space shuttle flights. Behnken flew STS-123 in March 2008 and STS-130 in February 2010, and he performed three spacewalks during each mission. Born in St. Anne, Missouri, he has bachelor’s degrees in physics and mechanical engineering from Washington University and earned a master’s and doctorate in mechanical engineering from California Institute of Technology. Before joining NASA, Behnken was a flight test engineer with the U.S. Air Force.

Hurley will be the spacecraft commander for Demo-2, responsible for activities such as launch, landing and recovery. He was selected as an astronaut in 2000 and has completed two spaceflights. Hurley served as pilot and lead robotics operator for both STS‐127 in July 2009 and STS‐135, the final space shuttle mission, in July 2011. The New York native was born in Endicott but considers Apalachin his hometown. He holds a Bachelor of Science degree in Civil Engineering from Tulane University in Louisiana and graduated from the U.S. Naval Test Pilot School in Maryland. Before joining NASA, he was a fighter pilot and test pilot in the U.S. Marine Corps.

Lifting off from Launch Pad 39A atop a specially instrumented Falcon 9 rocket, Crew Dragon will accelerate its two passengers to approximately 17,000 mph and put it on an intercept course with the International Space Station. Once in orbit, the crew and SpaceX mission control will verify the spacecraft is performing as intended by testing the environmental control system, the displays and control system and the maneuvering thrusters, among other things. In about 24 hours, Crew Dragon will be in position to rendezvous and dock with the space station. The spacecraft is designed to do this autonomously but astronauts aboard the spacecraft and the station will be diligently monitoring approach and docking and can take control of the spacecraft if necessary.

After successfully docking, Behnken and Hurley will be welcomed aboard station and will become members of the Expedition 63 crew. They will perform tests on Crew Dragon in addition to conducting research and other tasks with the space station crew.

Although the Crew Dragon being used for this flight test can stay in orbit about 110 days, the specific mission duration will be determined once on station based on the readiness of the next commercial crew launch. The operational Crew Dragon spacecraft will be capable of staying in orbit for at least 210 days as a NASA requirement.

Upon conclusion of the mission, Crew Dragon will autonomously undock with the two astronauts on board, depart the space station and re-enter the Earth’s atmosphere. Upon splashdown just off Florida’s Atlantic Coast, the crew will be picked up at sea by SpaceX’s Go Navigator recovery vessel and return to Cape Canaveral.

The Demo-2 mission will be the final major step before NASA’s Commercial Crew Program certifies Crew Dragon for operational, long-duration missions to the space station. This certification and regular operation of Crew Dragon will enable NASA to continue the important research and technology investigations taking place onboard the station, which benefits people on Earth and lays the groundwork for future exploration of the Moon and Mars starting with the agency’s Artemis program, which will land the first woman and the next man on the lunar surface in 2024.

Once Demo-2 is complete, and the SpaceX and NASA teams have reviewed all the data for certification, NASA astronauts Victor Glover, Mike Hopkins, Shannon Walker and JAXA (Japan Aerospace Exploration Agency) astronaut Soichi Noguchi have been assigned to fly on Dragon’s first six-month operational mission (Crew-1) targeted for later this year.

In preparation for Demo-2, SpaceX has completed a number of major milestones for NASA’s Commercial Crew Program. In March 2019, SpaceX completed an end-to-end test flight of Crew Dragon without NASA astronauts onboard, making Dragon the first American spacecraft to autonomously dock with the International Space Station and safely return to Earth.

In January 2020, SpaceX demonstrated Crew Dragon's in-flight launch escape capability to reliably carry crew to safety in the unlikely event of an emergency on the launch pad or at any point during ascent. SpaceX has completed over 700 tests of the spacecraft's SuperDraco engines, which fired together at full throttle can power Dragon 0.5 miles away from Falcon 9 in 7.5 seconds, accelerating the vehicle more than 400 mph.

SpaceX has completed 26 tests of Crew Dragon’s enhanced Mark 3 parachute design, which will provide a safe landing back on Earth for astronauts returning from the Space Station. These tests include 13 successful single parachute drop tests, 12 successful multi-parachute tests, and a successful demonstration of the upgraded parachute system during Crew Dragon’s in-flight abort test.

Additionally, SpaceX and NASA have jointly executed a series of mission simulations from launch and docking to departure and landing, an end-to-end demonstration of pad rescue operations, and a fully integrated test of critical crew flight hardware on the Demo-2 Crew Dragon spacecraft with NASA astronauts Bob Behnken and Doug Hurley participating in their Demo-2 spacesuits.

Demo-2 is the final major milestone for SpaceX’s human spaceflight system to be certified by NASA for operational crew missions to and from the International Space Station.

SpaceX is returning human spaceflight to the United States with one of the safest, most advanced systems ever built, and NASA’s Commercial Crew Program is a turning point for America’s future in space exploration that lays the groundwork for future missions to the Moon, Mars, and beyond.

NASA’s Commercial Crew Program is working with the American aerospace industry as companies develop and operate a new generation of spacecraft and launch systems capable of carrying crews to low-Earth orbit and the International Space Station. Commercial transportation to and from the station will provide expanded utility, additional research time and broader opportunities for discovery on the orbiting laboratory.

The station is a critical testbed for NASA to understand and overcome the challenges of long-duration spaceflight. As commercial companies focus on providing human transportation services to and from low-Earth orbit, NASA is freed up to focus on building spacecraft and rockets for deep space missions.

Since the Mercury program in the early 1960s, NASA has used an almost identical operating model to achieve its goals of human spaceflight. This includes the Space Shuttle Program and the American portions of the International Space Station. NASA would identify a need for a crew transportation system and then the agency's engineers and specialists would oversee every development aspect of the spacecraft, support systems and operations plans. A commercial, aerospace contractor would be chosen to build the system, ensuring that it meets the specifications spelled out by NASA. Personnel from NASA would be heavily involved and oversee the processing, testing, launching and operation of the crew system to ensure safety and reliability. All of the hardware and infrastructure would be owned by NASA.

NASA identified a need for a crew transportation system and a broad set of requirements that would be necessary to ensure crew safety. In the case of commercial crew, the need centered around a safe, reliable and cost-effective means of getting humans to low-Earth orbit, including the International Space Station, and return safely to Earth. Interested companies are free to design in a way they think is best and are encouraged to apply their most efficient and effective manufacturing and business operating techniques. The companies own and operate their hardware and infrastructure. NASA's engineers and aerospace specialists work closely with the commercial companies, allowing for substantial insight into the development process and offering up expertise and available resources. The Commercial Crew Program is the first time this model has been implemented.