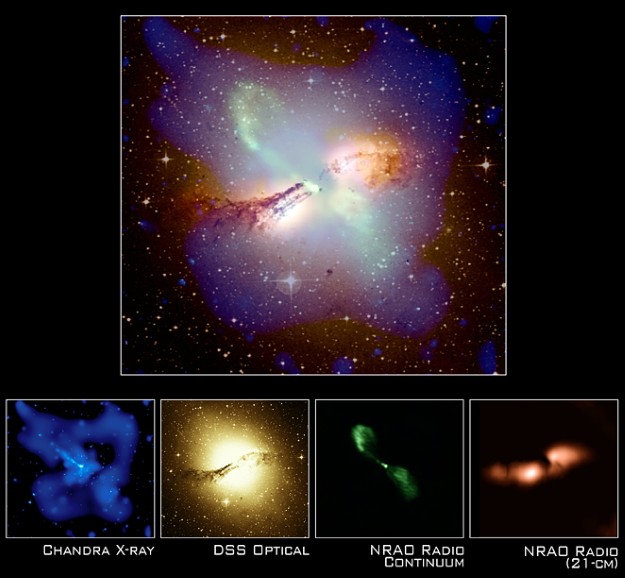 Composite image of Centaurus A, showing the jets emerging from the galaxy’s central black hole, together with the associated gamma radiation. The composite X-ray (blue), radio (pink and green), and optical (orange and yellow) image of the galaxy Centaurus A presents a stunning tableau of a galaxy in turmoil. A broad band of dust and cold gas is bisected at an angle by opposing jets of high-energy particles blasting away from the supermassive black hole in the nucleus. Two large arcs of X-ray emitting hot gas were discovered in the outskirts of the galaxy on a plane perpendicular to the jets. If we could view Centaurus A from the top as if directly down the “barrel” of the jet, it would appear to us as a quasar. Quasars, or “quasi-stellar radio sources” were originally discovered with radio telescopes in the 1950s. It was not until the 1960s that their optical counterparts were faithfully detected and shown to lie at extreme cosmological distances from our own Galaxy. Emission features in the optical spectrum of the quasars where systematically shifted towards the red end of the spectrum (“redshifted”) compared to where they ought to lie. Many alternative explanations for the observed redshift of quasars were postulated in the 1960s before it was eventually attributed to the stretching of the light waves as they traveled to Earth through the expanding Universe. The higher the redshift, the more distant the quasar. The more distant the quasar, the longer the light has been traveling to Earth and the further back in time we are looking when we detect the quasar light with telescopes. [Image Credit: X-ray (NASA/CXC/M. Karovska et al.); Radio 21-cm image (NRAO/VLA/J.Van Gorkom/Schminovich et al.), Radio continuum image (NRAO/VLA/J. Condon et al.); Optical (Digitized Sky Survey U.K. Schmidt Image/STScI)].

An international collaboration bringing together over 200 scientists from thirteen countries has shown that the very high-energy gamma-ray emission from quasars, galaxies with a highly energetic nucleus, is not concentrated in the region close to their central black hole but in fact extends over several thousand light-years along jets of plasma. This discovery shakes up current scenarios for the behavior of such plasma jets. The work was carried out as part of the HESS collaboration, involving in particular the CNRS (French National Centre for Scientific Research), CEA (French Alternative Energies and Atomic Energy Commission), the Max Planck society, and a group of research institutions and universities in Germany.

Over the past few years, scientists have observed the Universe using gamma rays, which are very high-energy photons. Gamma rays, which form part of the cosmic rays that constantly bombard the Earth, originate from regions of the Universe where particles are accelerated to huge energies unattainable in human-built accelerators. Gamma rays are emitted by a wide range of cosmic objects, such as quasars, which are active galaxies with a highly energetic nucleus. The intensity of the radiation emitted from these systems can vary over very short timescales of up to one minute. Scientists therefore believed that the source of this radiation was very small and located in the vicinity of a supermassive black hole, which can have a mass several billion times that of the Sun. The black hole is thought to gobble up the matter spiraling down into it and eject a small part of it in the form of large jets of plasma, at relativistic speeds, close to the speed of light, thus contributing to the redistribution of matter throughout the Universe.

Gamma rays have the smallest wavelengths and the most energy of any wave in the electromagnetic spectrum. They are produced by the hottest and most energetic objects in the universe, such as neutron stars and pulsars, supernova explosions, and regions around black holes. On Earth, gamma waves are generated by nuclear explosions, lightning, and the less dramatic activity of radioactive decay.

Unlike optical light and x-rays, gamma rays cannot be captured and reflected by mirrors. Gamma-ray wavelengths are so short that they can pass through the space within the atoms of a detector. Gamma-ray detectors typically contain densely packed crystal blocks. As gamma rays pass through, they collide with electrons in the crystal. This process is called Compton scattering, wherein a gamma ray strikes an electron and loses energy, similar to what happens when a cue ball strikes an eight ball. These collisions create charged particles that can be detected by the sensor.

Using the HESS observatory in Namibia, an international astrophysics collaboration observed a radio galaxy (a galaxy that is highly luminous when observed at radio wavelengths) for over 200 hours at unparalleled resolution. As the nearest radio galaxy to Earth, Centaurus A is favorable to scientists for such a study, enabling them to identify the region emitting the very high-energy radiation while studying the trajectory of the plasma jets. They were able to show that the gamma-ray source extends over a distance of several thousand light-years. This extended emission indicates that particle acceleration does not take place solely in the vicinity of the black hole but also along the entire length of the plasma jets. Based on these new results, it is now believed that the particles are reaccelerated by stochastic processes along the jet. The discovery suggests that many radio galaxies with extended jets accelerate electrons to extreme energies and might emit gamma-rays, possibly explaining the origins of a substantial fraction of the diffuse extragalactic gamma background radiation.

These findings provide important new insights into cosmic gamma-ray emitters, and in particular about the role of radio galaxies as highly efficient relativistic electron accelerators. Due to their large number, it would appear that radio galaxies collectively make a highly significant contribution to the redistribution of energy in the intergalactic medium. The results of this study required extensive observations and optimized analysis techniques with H.E.S.S., the most sensitive gamma-ray observatory to date. The next-generation Cherenkov Telescope Array (CTA) will no doubt make it possible to observe this phenomenon in even greater detail.

HESS is a system of Imaging Atmospheric Cherenkov Telescopes that investigates cosmic gamma rays in the energy range from 10s of GeV to 10s of TeV. The name HESS stands for High Energy Stereoscopic System, and is also intended to pay homage to Victor Hess, who received the Nobel Prize in Physics in 1936 for his discovery of cosmic radiation. The instrument allows scientists to explore gamma-ray sources with intensities at a level of a few thousandths of the flux of the Crab nebula (the brightest steady source of gamma rays in the sky). HESS is located in Namibia, near the Gamsberg mountain, an area well known for its excellent optical quality. The first of the four telescopes of Phase I of the HESS project went into operation in the Summer of 2002. All four were operational by December 2003, and were officially inaugurated on September 28, 2004. A much larger fifth telescope, HESS II, has been operational since July 2012, extending the energy coverage towards lower energies and further improving sensitivity.

The HESS observatory is operated by a collaboration of more than 260 scientists from about 40 scientific institutions and thirteen different countries: Namibia and South Africa, Germany, France, the UK, Ireland, Austria, the Netherlands, Poland, Sweden, Armenia, Japan, and Australia.